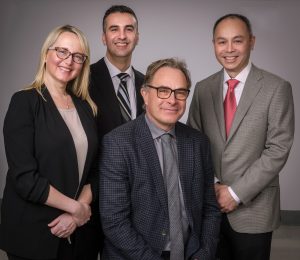 The Department of Medicine Innovation Platform is currently supporting the development of a business plan for the clinic that will conduct endoscopic submucosal dissections.

Cancer continues to have a substantial and growing impact in Canada and on our health care system as a leading cause of death amongst Canadians. This includes cancers of the gastrointestinal tract, such as esophageal cancer, gastric cancer, colon cancer, and rectal cancer. If grouped together, they represent the most frequent type of cancer and the most common cause of cancer-related death worldwide (1).

Historically, these cancers, and the pre-cancerous polyps or lesions which give rise to them, have been managed by surgery. These surgeries can potentially include the removal of the esophagus, the stomach, the colon and the rectum and/or anus. Minimally invasive endoscopic resection techniques, provide an alternative treatment whereby pre-cancerous lesions and early cancers are removed by a flexible camera called an endoscope or colonoscope without creating an incision. These techniques are a critical advance in the management of gastrointestinal cancers as they provide an organ-sparing alternative that is effective but also safe and less costly. These techniques include endoscopic mucosal resection (EMR) and endoscopic submucosal dissection (ESD). Moreover, analogous techniques have now been developed for motility disorders of the gastrointestinal tract known as Peroral endoscopic myotomy (POEM).

The purpose of colonoscopy is to detect growths along the bowel wall, known as polyps, as their removal plays a critical role in the early detection of colorectal cancer and its prevention through the removal of these polyps (2, 3). The majority of detected polyps are small (< 10mm). These polyps have a low likelihood of cancer and can be remove by standard techniques known as polypectomy.

Large polyps (≥ 20mm), are an important subgroup as advanced techniques are needed to effectively and safely removed them. Endoscopic mucosal resection is a technique, whereby during colonoscopy a snare, similar to a lasso, is placed around the polyp and removed using electrocautery. It is now the preferred treatment for these polyps, consistent with North American and European guidelines (4, 5). These recommendations are based on high-quality evidence showing that EMR can effectively, efficiently and safely manage even the most complex polyps including circumferential polyps (6), previously attempted polyps (7), those involving the joining between the small bowel and colon or ileocecal valve (8), those around the opening of the appendix which is in the colon (9) and those at the anorectal junction (10). Furthermore, advances in the procedure have largely negated the risk of complications such as the polyp growing back known as recurrence (11), bleeding (12) or perforation (13, 14).

First introduced in Japan as a treatment for early gastric cancer, it has now been expanded to the entire gastrointestinal tract including the esophagus, stomach, colon and rectum (15, 16). It is performed by using an electrosurgical knife, or endoscopic scalpel, to remove the lesion either through an endoscope or colonoscope. A key advantage of this technique is that by removing the specimen in one piece it provides an opportunity for curing early cancers and therefore preventing the need to remove the esophagus, stomach, colon or rectum, depending on the location of the polyp or growth (17-21).

Patients with early cancers of the gastrointestinal tract are commonly presented at our multi-disciplinary rounds which includes Drs. Neal Shahidi and Drs. Eric Lam, but also our surgeons, radiologists, pathologists and oncologists where needed.

Achalasia and other spastic swallowing disorders of the esophagus are debilitating conditions resulting in difficulty swallowing, the regurgitation of food, chest pain, weight loss and malnutrition. Historical treatment options include endoscopic balloon dilation, botulinum toxin (Botox) injections, and surgery known as a Heller’s myotomy, whereby the muscles which make up the lower part of the esophagus are cut.

Per-oral endoscopic myotomy represents an endoscopic alternative to a Heller’s myotomy where the muscles of the esophagus are cut using an electrosurgical knife through an endoscope (22). Due to its efficacy and safety it is now a first-line approach for the treatment of Achalasia and is the preferred treatment for certain types of achalasia and spastic swallowing disorders of the esophagus (23).

**The bibliography is available upon request